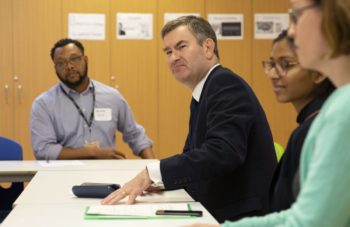 Secretary of State for Justice and Lord Chancellor David Gauke has signalled his personal support for reform of the UK’s assisted dying laws, adding that he is in ‘favour of reforms in this area’.

His comments, which appeared in the print version of The Express yesterday, are the first time such a senior Government minister has come out in support of assisted dying. It is also notable as Mr Gauke is currently considering a challenge from Paul Lamb, who Humanists UK is supporting in his fresh bid to change the law on assisted dying.

Mr Gauke’s personal support for assisted dying was revealed when he responded to a plea by a terminally ill man, Geoffrey Whaley. Mr Whaley wrote to the Justice Secretary before he died in Switzerland in February.

‘Personally I am in favour of reform in this area, and sympathise with calls to allow individuals choice over how to end their lives without fear of criminal prosecution, for themselves or those close to them.”

‘Whilst Parliament has so far voted against any relaxation of the law, I hope that assisted dying is an issue to which it will return.

‘In the meantime, I assure you that I and others do hear Mr Whaley’s plea.’

Paul Lamb, paralysed from the neck down, wrote to Mr Gauke on 3 May asking for him to make clear the Government’s plans to look into assisted dying.  If a satisfactory response is not received from the government to Paul’s letter, Paul intends to apply to the court to seek a judicial review of the current legislation. Paul argues that the law should be changed to allow assisted dying to be legal for those in his position and the terminally ill.

‘I hope that the rationality and compassion of David Gauke finds more and more support among his fellow parliamentarians. They have it in their power to give people like Paul the dignity of a choice to end their suffering and they should grasp the nettle. Their inaction is a moral stain on our nation.’