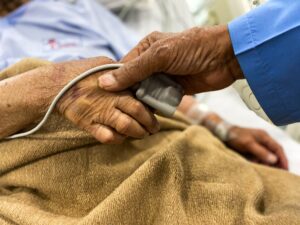 A diagnosis of a serious health condition is associated with an considerably elevated rate of suicide according to new data released by the Office of National Statistics (ONS). Almost 1,000 people with lung and heart conditions died by suicide in England between 2017 and 2020. We join Humanists UK, a fellow member of the Assisted Dying Coalition, in calling for a compassionate assisted dying law in order to introduce much-needed safeguards and support for people who are incurably suffering and terminally ill.

People who travelled abroad for the purpose of assisted dying would not appear in the ONS data.

Chair of My Death, My Decision, Trevor Moore comments:

“The latest data from the ONS on comparative suicide rates provides yet more evidence to show how our current prohibition on assisted dying must be removed. Far from offering protection, our laws protract unnecessary suffering and cause the vulnerable to take matters into their own hands. This is not only a lonely and harrowing experience for the person involved, it often has life-changing consequences for those they leave behind.

That is why My Death, My Decision campaigns for a compassionate assisted dying law for both the terminally ill and the incurably suffering that would enable people to have control over the end of their lives. We campaign to ensure any law would set out strong safeguards to mitigate the risks to the vulnerable, far more regulated than existing situations in which end of life decisions can be made. Then a person seeking an assisted death can plan a peaceful end to their life when, where and with whom they wish.

We call upon the Justice Secretary to instigate a public inquiry on assisted dying without any further delay.”