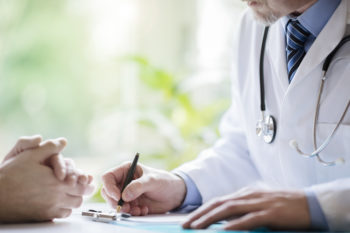 Around 30 doctors, philosophers, academics, and campaigners have written an open letter urging members of the British Medical Association (BMA) to support assisted dying in its survey which closes this week.

The joint letter, printed in The Guardian today, was organised by the UK Assisted Dying Coalition, of which Humanists UK is a founding member, and follows just days after the Royal College of GPs voted to maintain their opposition to assisted dying, despite a majority of GPs wanting to move to a neutral or supportive position.

The full letter and signatories is below.

As medical practitioners increasingly recognise the importance of autonomy and include the public in the planning and delivery of healthcare, it has become vital to listen to and engage with our patients’ wishes. Yet, when it comes to assisted dying, we have become out of step.

In 2006, the British Medical Association (BMA) moved to oppose assisted dying. Even back then, polls indicated considerable public support for assisted dying, and people rarely travelled abroad to end their life.

But, in the years since, public support for a change in the law has risen to around 90%. Despite the best efforts of palliative care, at least one UK citizen a week is forced to leave their home and travel to Switzerland to have an assisted death – which at best, is a decision fraught with emotional and financial cost, and at worst involves someone ending their life before they would otherwise wish.

It is time for change. Over 150 million people worldwide have gained the option of a safeguarded assisted death, as more countries, including Canada, have changed their laws. If other countries can achieve this in a safe and legal manner, why can’t we?

The BMA’s survey on assisted dying closes this Thursday. We urge members to vote in support of reform.

Peter Cave, Lecturer in philosophy for the Open University and City University, London and chair of the Humanist Philosophers Group

Professor John Dupré, Professor of Philosophy of Science and Director, University of Exeter

Professor AC Grayling Master of New College of the Humanities, supernumerary fellow of St Anne’s College, Oxford, and co-editor of the Wiley Blackwell Handbook of Humanism

See the letter in The Guardian.

Read more about our work on assisted dying.